A New Plaza for Rosslyn 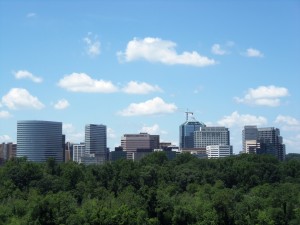 Rosslyn is one of the incredible urban villages along the Orange Line. Rosslyn provides a variety of places to live and green spaces to enjoy. As a central neighborhood in Arlington County, there has been a lot of redevelopment going on over the years. The County recently approved plans to give new life to a large block which runs along the eastern boundary of Rosslyn. To be known as Rosslyn Plaza, this 7.65-acre area will breathe new life into the community.

According to the approved proposal, all of the current buildings along the block will be demolished and an entire new plaza will be built. Two residential buildings, four office buildings, and the Spectrum Theater will be replaced by five new high rises, to be built by Vardo & Gould Properties. These buildings will be comprised of 2.5 million square feet combined. There will be retail shops, residential units, office space, and a 200 room hotel. Also included is new public park and over 2,000 parking spaces as well. The final plans and date to begin construction has yet to be released. Once done, however, this will be the largest redevelopment in Rosslyn to date.

Each of the five towers slated for Rosslyn Plaza will have to go through a final approval stage before construction begins. With the five phase split to redevelop the area, Rosslyn Plaza is slated to be a 25- year project in the making. The first phase will include the construction of the first office building, followed by phase two, which will be a 3000-unit residential building. Phase three will be a second office building, with phase four being either a hotel only or combo hotel and residential space. Phase five could see either a third office building or one with some residential units as well.

The big focal point for the public at large will be the new park. It is expected that the park will be pedestrian focused and offer a variety of uses for the space. The final design is not expected for some time, as the park is planned to be built during the third stage of the Rosslyn Plaza development. The general design of the park and the buildings are to help provide and epitomize an urban living experience with plenty of activities, amenities, and attractions for residents and visitors alike. It will be interesting to watch this part of Rosslyn change over the next several years.

When you are ready to buy or sell your home, myself and the Orange Line Living team are here to provide you with our unique and specialized services so you can turn your dreams into reality. To learn more about how we can help you, contact us directly at 571-969-7653 or at [email protected]

Have a Field Day with These Fun Things to Do This Weekend – DC Metro Area Events, July 26-28

Top 5 Rookie Mistakes to Avoid When Selling Your Home